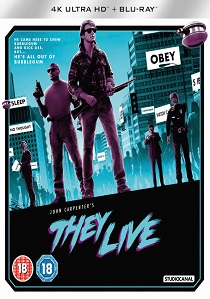 This 4 disc limited Collector's Edition of John Carpenter's 1988 cult classic They Live has been stunningly restored in 4K.

This release is beautifully packaged with a stylish, newly commissioned illustration on the cover. It contains a UHD of the feature as well as a Blu-ray feature disc, extra features disc and the original soundtrack on CD. It also contains 5 artcards, a newly illustrated theatrical poster and booklet containing behind the scenes stills, articles and an essay from celebrated film journalist Kim Newman.

WWF wrestler "Rowdy" Roddy Piper plays John Nada, a homeless, unemployed construction worker who discovers a pair of sunglasses that when worn, suddenly reveal a world run by capitalist, yuppie aliens intent on keeping the human race sedate and brainwashed with subliminal messages fed through advertising and the media.

Luckily for us all Nada is a man of action and so begins the fight-back (including perhaps the longest fistfight in cinema's history) to save humankind.

They Live: Collector's Edition is released on 4K UHD 20th September 2021 from StudioCanal.