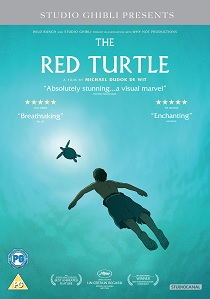 StudioCanal is pleased to announce that the Oscar-nominated and highly acclaimed The Red Turtle - a deeply moving and uplifting story about the power of the human spirit - arrives on Digital Download on 18th September 2017 and on DVD and Double Play (Blu-ray and DVD) on 25th September 2017.

Studio Ghibli's first international co-production from Oscar-winning director Michael Dudok de Wit (Father and Daughter), The Red Turtle recounts the milestones in the life of a human being through the story of a man shipwrecked on a tropical island inhabited by turtles, crabs and birds.