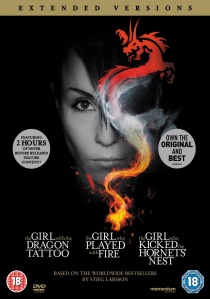 News
News Article Go back to homepage
Get ready for one of this year's most eagerly anticipated box sets. Stieg Larsson's The Girl... books have captured audiences worldwide and spawned a trilogy of wildly successful, award winning films. Now, for the first time Momentum Pictures will release The Girl... Trilogy (Extended Versions), with over two hours of previously unreleased scenes from 19th September 2011.
Momentum Pictures
Unknown
19/09/2011
Thank you for supporting DVD365.net when you order using the link(s) below. As an Amazon Associate we earn from qualifying purchases
Buy DVD
Buy BD
Information

Get ready for one of this year's most eagerly anticipated box sets. Stieg Larsson's The Girl... books have captured audiences worldwide and spawned a trilogy of wildly successful, award winning films. Now, for the first time Momentum Pictures will release The Girl... Trilogy(Extended Versions) in one stunning box set, with over two hours of previously unreleased scenes in four disc DVD and Blu-ray sets from 19th September 2011. Now there's more of these complex characters and thrilling plots to discover.

The Girl Trilogy (Extended Versions) includes The Girl with the Dragon Tattoo, The Girl Who Played with Fire and The Girl Who Kicked the Hornets' Nest, a franchise that has sold over 1 million Dvd & Blu-ray units.

Based on Stieg Larsson's literary phenomenon and featuring an Award winning breakthrough performance by Noomi Rapace, the trilogy follows the unlikely heroine Lisbeth Salander and journalist Mikael Blomkvist. First as they unite to solve the case of a missing girl and then as they fight to uncover the truth about Salander's past, a past full of secrets that a mysterious underground government group would kill to keep hidden.

Now there's more to discover with the extended versions of the films, featuring 2 hours of never before released** feature content, available in both original Swedish language with English subtitles and English language audio.

The Girl With The Dragon Tattoo

Mikael Blomkvist (Michael Nyqvist), a disgraced journalist and enigmatic computer hacker, anti-heroine Lisbeth Salander (Noomi Rapace), form an alliance to solve a historical case of a missing girl. The case brings them into contact with some of Sweden's most powerful, secretive and corrupt criminals.

As they unravel a dark and appalling family history, the unlikely duo discover how close they are to the truth of corruption and crime. Daring to defy the law, Lisbeth, the dangerous security specialist and Mikael, the stubborn, charming yet fiercely obsessive detective find that they too could become targets.

The Girl Who Played With Fire

Back at the helm of Millennium magazine, Mikael is intent on exposing a billion dollar sex trafficking ring but when two of his researchers are murdered, he realises there's more to this story than first thought after Lisbeth is framed for the crimes. Unconvinced that she is involved, he attempts to clear her name and uncover the real killers. But secretive hacker Lisbeth goes on the run and soon stumbles upon secrets of her own past, secrets that people would kill to keep hidden.

The Girl Who Kicked The Hornets' Nest .

The Girl Who Kicked The Hornets' Nest picks up where The Girl Who Played With Fire left off. Under police guard in hospital, Lisbeth is charged with murder and awaits the trial that has the country gripped. Cut off from all communication with the outside world, she must rely on journalist and former lover, Mikael to prove her innocence and expose the political cover up that threatens to destroy her freedom. In his way stands a mysterious group who will go to any lengths to keep the shocking truth of their actions a secret. Expect conspiracies and corruption as the details of Lisbeth's case are thrashed out in court. Millennium fans won't be disappointed with the dramatic climax in which answers to questions are finally revealed.

HotDVDBDUHD
From the acclaimed director of fan-favourites such as Baby Driver, Shaun of the Dead and The World's End comes the tribute to 1960s London in Last Night In Soho, available to own on DVD, Blu-ray and 4K UHD 31st January 2022 from Universal Pictures (UK). END_OF_DOCUMENT_TOKEN_TO_BE_REPLACED
Top PicksView