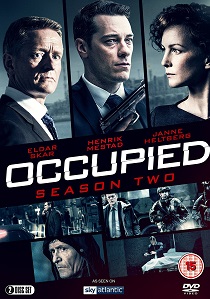 One year after the Russian Silk Occupation forced Norway to resume oil production to supply Europe, as it finds itself with a severe energy crisis, the daily life of Norwegians is still remarkably similar to the one we currently know. What do they want? They're already in charge of the oil, which was the reason why they arrived in the first place. Why don't they leave?

This season kicks off with an armed conflict between the Norwegian Coast Guard and a Russian Security Company, guarding the oil installation of Melkøya in Northern Norway. Conflicting interests collide. Arms are pointed at one another. No one wants to back down. Meanwhile, it becomes increasingly obvious that the premise for ruling the country is set by somebody else. The silk glove is turning into an iron fist. This forces the question of who s with the intruders and who s against them.

This high tensed crisis situation spurs a chain of conflicts that has severe consequences both politically and down to a personal level. The question that everybody has to ask them selves constantly, now that the pressure is increasing, and which is the tenet of the entire season is: Who can you trust?

Inspired by bestselling Scandinavian author Jo Nesbø, all eight episodes from the second season of the Norwegian political thriller Occupied is released on DVD and Blu-ray 11th June 2018 from Spirit Entertainment Limited.