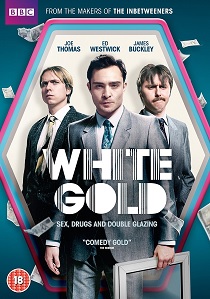 Set in Essex in 1983, the series epitomises the atmosphere of the era through the inner-workings of a double-glazing showroom. Ed Westwick (Gossip Girl) leads the cast as Vincent Swan, Head of Sales at Cachet Windows. Vincent is a smart, handsome, cocksure double-glazing salesman extraordinaire, who will stop at nothing to get a sale.

Vincent is married to Sam (Linzey Cocker, Waterloo Road), a strong mother, who puts her family first. She loves Vincent and is acutely aware of his capacity for reckless and thoughtless behaviour. However, Vincent's infidelity with their son's teacher could prove to be the last straw.

White Gold is filled with a classic soundtrack of hits from the 1980s, including tracks by Rod Stewart, Hall & Oates and Ian Dury. DVD Extras include a Behind The Scenes featurette with interviews with Ed Westwick, Joe Thomas and James Buckley.