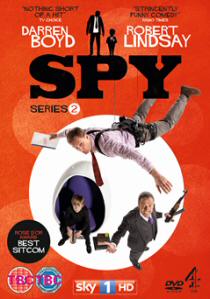 The all star cast return for Spy Series 2 with BAFTA award winners Darren Boyd (Green Wing), Robert Lindsay (My Family), Rebeckah Staton (Pulling, Mysterious Creatures) and up and coming star Jude Wright playing Boyd's quick-witted son. The critically acclaimed comedy is out to own on DVD from 29th July 2013 along with the series 1-2 boxset, courtesy of Channel 4 DVD.

Spy, an overnight ratings smash, follows hapless single father Tim (Boyd), whose one aim in life is to get his precocious son Marcus (Wright) to like him. The first series saw Tim accidentally recruited into MI5 and followed his attempts to balance his secret life as a trainee agent with his chaotic domestic life. Under the watchful eye of The Examiner (Lindsay), Tim surprised himself by successfully qualifying as a fully-fledged secret agent, although despite his best efforts, without winning the heart of his colleague Caitlin (Staton).

In Series 2 we catch up with Tim as a newly qualified agent, continuing to keep his secret from those closest to him and still attempting to win the love and respect of his son. While Tim struggles to deal with his work/life balance, one thing's for sure, there is never a dull moment undercover at MI5. First day on the job and his two worlds collide as Tim's covert career threatens to wreck his domestic situation.

From the brilliantly funny mind of British Comedy Award Winner Simeon Goulden (Secret Diary of a Call Girl and The Armstrong and Miller Show), the hugely entertaining Spy Series 2 is a must-see this summer, guaranteed to get all the family laughing.

Watch the hilarious comedy unfold with our loveable accidental agent careering from one potentially disastrous situation to another in Spy Series 2, available to own on DVD from 29th July 2013 along with the complete series 1-2 boxset.