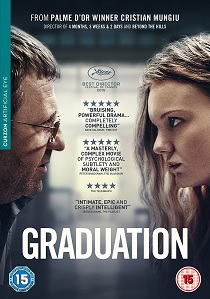 Palme d'Or winner Cristian Mungiu (4 Months, 3 Weeks & 2 Days, Beyond the Hills) returns with a masterly exploration of moral compromise and bureaucratic corruption, told through a captivating and intricately-plotted family drama that grips like a thriller.

Romeo, a physician living in a small mountain town in Transylvania, has raised his daughter, Eliza, with the idea that once she turns 18 she will leave to study abroad in the UK. But on the day before Eliza's first entrance exam to university she is assaulted in an attack that could jeopardise her entire future. Now Romeo has a decision to make - there are ways of solving her predicament, but not without betraying the moral principles that he, as a father, has taught Eliza throughout her life.

Winner of the Best Director prize at Cannes 2016, Graduation is a stunningly crafted morality play from one of European cinema's most revered auteurs. Executed with intricate formal precision and Mungiu's characteristically raw and authentic form of naturalism, Graduation is the mark of a filmmaker at the height of his powers.

BD
In The Undoing, released on DVD and Blu-ray 22nd March 2021 from Warner Home Video, a chasm opens up in the seemingly perfect life of a successful therapist: a violent death, a missing spouse, and a ... END_OF_DOCUMENT_TOKEN_TO_BE_REPLACED
Hot PicksView