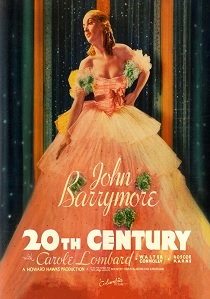 The second film Howard Hawks (The Criminal Code) made at Columbia Pictures is among his greatest works. John Barrymore plays a theatre impresario down on his luck. Carole Lombard is his former protégé, now a major star. When the two meet by chance aboard the Twentieth Century locomotive, their love-hate relationship is reignited.

Now recognised as a classic, Twentieth Century, released 22nd March 2021 as a Limited Edition Blu-ray from Powerhouse Films, is the film which established the template for the screwball comedy - and made Lombard a star.

BD
A stellar cast sizzles in Heat, a taut psychological drama about an obsessive detective and a brilliant thief whose fates are linked in the aftermath of a high-stakes securities heist, released on 4K UHD 8th August 2022 from ... END_OF_DOCUMENT_TOKEN_TO_BE_REPLACED
Top PicksView