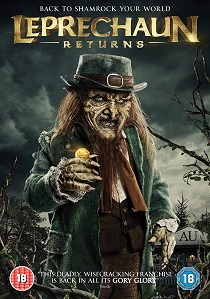 Horror's smallest terror is back to reclaim the treasure that's been lost for 25 years in Leprechaun Returns. With Mark Holton reprising his role from the cult-classic Leprechaun (1993), this deadly, wisecracking franchise is back in all its gory glory and now available in a new double DVD pack with the original movie Leprechaun from 1st April 2019, courtesy of Lionsgate Home Entertainment.

When the sorority sisters of the Alpha Upsilon house decide to go green and use an old well as their water source they unwittingly awaken a pint-sized, green-clad monster. The Leprechaun wants a pot of gold buried near the sorority house, but first he must recover his powers with a killing spree-and only the girls of AU can stop him...

This brand new outing from the classic franchise will be available on DVD in a new double pack with the original movie Leprechaun. Go back to where it all began. J.D. Beding and her daughter Tory (Jennifer Aniston) take a break at a summer house which is unfortunately located on the site of an evil leprechaun's stolen gold - and the leprechaun will stop at nothing to get it back! J.D., Tory and local boys Nathan, Alex and Ozzie team up to prevent the leprechaun's trail of magic and murder as he tries to drive them away from his treasure.

Related Articles
The Void, Psycho Goreman, Day of the Dead: Season 1
The Face Of An Angel
Comments
Hot Pick