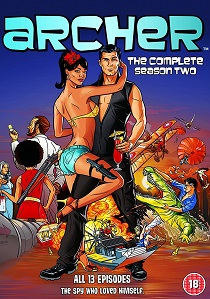 The world's most dysfunctional spy returns for a second series when Archer: Season 2 explodes onto Blu-ray & DVD on 26th March 2012 from Twentieth Century Fox Home Entertainment. Rude, lewd and hilarious, this edgy satire focuses on sexual relations with a splash of espionage on the side!

Archer is an animated, half-hour comedy set at the International Secret Intelligence Service (ISIS), a spy agency where global crises are merely opportunities for its highly trained employees to confuse, undermine, betray and quite literally screw each other over.

Having received five Annie Award® 2012 nominations, widely viewed as the animated equivalent of the Oscars®, as well as rave reviews across the board, Archer is fast becoming one of the best-loved cult shows on both sides of the pond.

UHD
After more than thirty years of service as one of the Navy's top aviators, Pete 'Maverick' Mitchell is back where he belongs as Top Gun: Maverick flies onto DVD, Blu-ray and 4K UHD 31st October 2022 from Paramount Home ... END_OF_DOCUMENT_TOKEN_TO_BE_REPLACED
Top PicksView