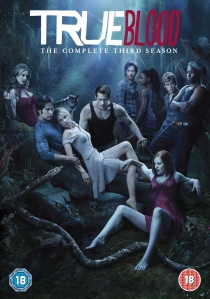 The hype refuses to die as the sexiest and most addictive show on TV returns with True Blood: The Complete Third Season released on DVD and Blu-Ray on 23rd May 2011, from HBO Home Entertainment. The entire 12 episode season will also be available to download from iTunes and a Complete Season One to Three box-set will also be released on both formats on the same day. So if you've not yet been bitten, now is the time to offer yourself to the glamorous charms and get addicted from Season One.

In Bon Temps, everyone has something to hide, but when new threats emerge, no one can conceal the secrets of their past. After Sookie (Anna Paquin) discovers that Bill (Stephen Moyer) has been kidnapped, she heads to Mississippi where she becomes entangled in a world ruled by a pack of vicious werewolves and the powerful Vampire King, Russell Edgington (Denis O Hare) There, her powers resurface and she learns that Bill may not be trusted. Eric (Alexander Skarsgård) is also drawn to the King's domain to settle an old score; Tara (Rutina Wesley) dives deep into turmoil; Jason (Ryan Kwanten) falls for a mysterious woman; Lafayette (Nelson Ellis) can't avoid love or demons; Jessica (Deborah Ann Woll) sharpens her vampire skills; and Sam (Sam Trammel) uncovers the truth about his birth family. It all leads up to the revelation of the series... Sookie's real identity.

With a whole host of new characters appearing alongside everyone's favourite VILFs, the relentlessly fast-paced third season proves that one bite is never enough - it's True Blood at its most sexy and addictive yet.

True Blood is the latest hit series from Six Feet Under creator Alan Ball, drawn from the meticulously crafted world of novelist Charlaine Harris. Described as 'popcorn for smart people' by Emmy® award-winning Ball, True Blood caused a sensation from the first episode of season one and the latest instalments only build on the colourful life of the supernatural eccentrics.

Widely believed to be the adult, sexier alternative to that other vampire hit Twilight; True Blood has made international stars of its cast and continues to grow in popularity and intricacy with each season. The series has been a multi-award winning, critically acclaimed hit for HBO, receiving the highest US broadcast ratings for the channel since The Sopranos and over 350,000 copies of the DVD sold in the UK to date.

HotUHD
Now more stunning than ever before, return to the stunning locations and epic adventures in Peter Jackson's Middle-earth in The Lord of the Rings Trilogy, arriving on stunning 4K UHD 30th November 2020 from Warner Home Video. END_OF_DOCUMENT_TOKEN_TO_BE_REPLACED
Top PicksView