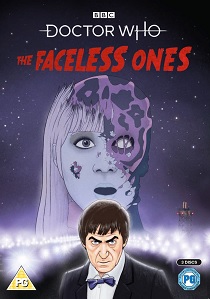 The Doctor and his friends Ben, Polly and Jamie arrive at Gatwick airport. They quickly stumble upon an alien plot, centring upon the mysterious 'Chameleon Tours' - a low-price holiday company, whose young passengers have been vanishing in unexplained circumstances. With the help of Scotland Yard and the airport staff, the Doctor investigates further, but it isn't long before his own friends start disappearing too.

Most of the BBC's original 1967 master recordings for The Faceless Ones were lost soon after the programme's original transmission. However, audio-only recordings have survived and have been used here to create a brand new fully animated reconstruction of this lost classic.

Doctor Who: The Faceless Ones is released on DVD and Blu-ray 10th March 2020 from BBC Worldwide.

UHD
Tom Hardy returns as the lethal protector Venom, one of Marvel's greatest and most complex characters in Venom: Let There Be Carnage, available on 4K Ultra HD, Blu-ray and DVD on 3rd January 2022 from Sony Pictures Home ... END_OF_DOCUMENT_TOKEN_TO_BE_REPLACED
Top PicksView