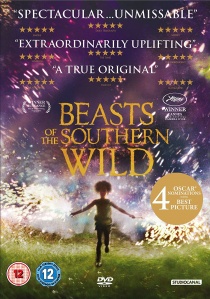 Following a theatrical opening to tremendous national and international acclaim and winner of a multitude of prestigious awards including the coveted Sutherland Award at the London Film Festival for most original and imaginative feature debut, Beasts Of The Southern Wild set the world alight with its heart-tugging, emotionally charged magic and will finally be available to own on DVD/Blu-ray from 11th February 2013, courtesy of StudioCanal.

In a forgotten but defiant bayou community cut off from the world by a sprawling levee, six-year-old Hushpuppy exists on the brink of orphanhood. Her mother long gone and her father Wink, a wild-man on a perpetual spree, Hushpuppy is left to her own devices on an isolated compound filled with semi-feral animals. She perceives the natural world to be a fragile web of living, breathing, squirting things, in which the entire universe depends on everything fitting together just right. So when a hundred year storm raises the waters around her town, her daddy is suddenly stricken with illness and fierce prehistoric creatures awaken from their frozen graves to come charging across the planet, Hushpuppy sees the natural order of everything she holds dear collapsing around her.

Desperate to repair the structure of her world in order to save her ailing father and sinking home, this tiny hero must learn to survive an unstoppable catastrophe of epic proportions.

Including an exciting host of extra bonus features, experience the magic at home with the captivating and charismatic Hushpuppy, who lives with her daddy at the edge of the world.

BD
From the Wachowski brothers and Joel Silver, the masterminds behind The Matrix trilogy, comes another intriguing, action-packed fantasy-thriller in V for Vendetta, released on 4K UHD 2nd November 2020 ... END_OF_DOCUMENT_TOKEN_TO_BE_REPLACED
Hot PicksView