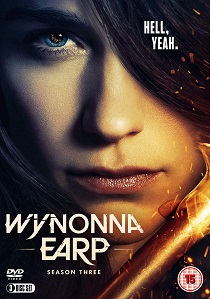 Wynonna Earp follows Wyatt Earp's great great-granddaughter as she battles demons and other creatures. With her unique abilities and a posse of dysfunctional allies, she's the only thing that can bring the paranormal to justice.

Reckless and reluctant gunslinger Wynonna Earp and her team of outmatched outsiders return to face monsters, revenants and their biggest fears as they fight to take down the demon who cursed the Earp family before he destroys the Ghost River Triangle - and the world.

HotUHD
After moving to a new town, two brothers discover that the area is a haven for vampires as the classic The Lost Boys is released on 4K UHD 20th September 2022 from Warner Home Video. END_OF_DOCUMENT_TOKEN_TO_BE_REPLACED
Top PicksView