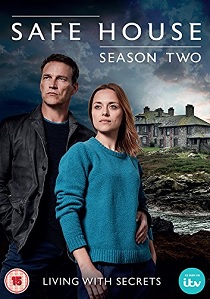 Stephen Moyer (True Blood) leads a stellar cast of in the next instalment of the anthology series Safe House, released on DVD 20th November 2017 from Spirit Entertainment Limited.

Moyer stars as charismatic yet impulsive ex-police officer Tom Brook who runs a police safe house, which stands on the wild and beautiful coastline of North Wales. Moyer is joined by actress Zoë Tapper (Mr Selfridge, Liar) as his partner Sam.

Tom and Sam's world is turned upside down when news of a shocking crime breaks. Years previously Tom investigated a series of abductions perpetrated by an assailant known as The Crow, who took wives away from husbands as they helplessly watched. On hearing breaking news of a crime bearing the same hallmarks Tom heads to the crime scene, revealing to the police that terrifyingly he believes The Crow is active again.