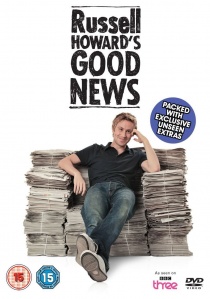 Series one of Russell Howard's Good News, BBC Three's most successful studio entertainment show - pulling in over 3 millions viewers per week and becoming the most requested BBC Three show on iPlayer whilst on air - is to be released on DVD for the first time on 15th November 2010 by 4DVD. This feature length collection brings together the best bits of the first eight episodes and sees Russell Howard put his spin on news stories that have got the media in a frenzy, plus exclusive and unseen bonus material.

The new release gives Good News fans the chance to revisit all the funniest moments from the acclaimed first series. Bringing together the show's best clips, sketches and stand-up on to one disc, the DVD offers Russell's inimitable take on the leading headlines of the time. Who can forget Russell's response to BNP leader Nick Griffin's provocative appearance on Question Time? Or his eagle-eyed discovery of some of the quirkier items on the news agenda...like the hapless robbers who thought permanent marker could make a good substitute for a balaclava.

In addition to footage from the show, the DVD also includes exclusive extras such as commentary from Russell and his fellow news junkies (aka his team of script contributors) - not to mention previously unseen sketches, the unaired pilot and behind-the-scenes action.

One of the UK's most successful live stand-up comedians, Russell is set to embark on a brand new arena tour, Right Here, Right Now, in spring 2011. Following his last sell-out UK arena tour, Big Rooms and Belly Laughs, the tour will see him perform at some of the country's biggest venues, including London's O2 Arena. He has previously released two bestselling live DVDs, 2008's Russell Howard Live and 2009's Russell Howard Live - Dingledodies, which have sold approximately 400,000 copies and dominated the top 10 of the DVD comedy chart during both years of release. A DVD featuring the first series of Russell Howard's Good News will be released this autumn by 4DVD.

In addition to being a regular on Mock The Week, Russell has twice featured on Live At The Apollo and appeared on Would I Lie To You (BBC One), Never Mind The Buzzcocks (BBC Two), and 8 Out 10 Cats (Channel 4).