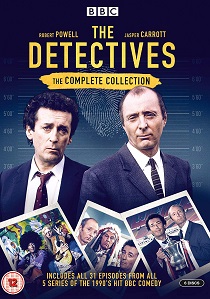 The Detectives: The Complete Collection (1993)

Accidentally promoted far beyond their level of competence, Detective Constables Bob Louis and David Briggs stumble from crime to crime relying on a unique blend of intuition, hunches and inspired guesses... all of them hopelessly wrong.

Incompetent, inept and usually in trouble, these bungling bobbies seem more likely to catch a cold than any Mr. Big, but somehow Superintendant Cottam always finds himself awarding them commendations.

Starring Robert Powell and Jasper Carrott as Dave Briggs and Bob Louis, all 31 episodes from all 5 series of the 1990s BBC comedy is released on DVD 15th October 2018 from BBC Worldwide.

BD
A stellar cast sizzles in Heat, a taut psychological drama about an obsessive detective and a brilliant thief whose fates are linked in the aftermath of a high-stakes securities heist, released on 4K UHD 8th August 2022 from ... END_OF_DOCUMENT_TOKEN_TO_BE_REPLACED
Top PicksView