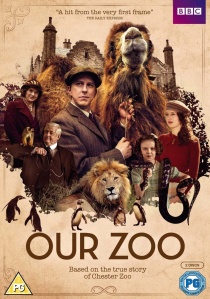 Heart-warming and charming family drama Our Zoo, based on the true story of how Chester Zoo came to be in the 1930s, comes to BBC DVD on 27th October 2014 and is available to pre-order.

Lee Ingleby (Inspector George Gently, Harry Potter and the Prisoner of Azkaban) leads the cast as George Mottershead, an ex-serviceman who fought the Great War and now has designs to transform a ramshackle house on the outskirts of Chester into the first British zoo without bars.

Joining Ingleby in the Mottershead family is Liz White (Life On Mars) as his stern but loving wife Lizzie. BAFTA nominated actress Anne Reid (Last Tango In Halifax) plays George's mother Lucy, whose life is turned upside down when her well-meaning husband, Albert (Peter Wright, The Paradise), sells their shop to help fund George's plan for the zoo. The story is retold through the eyes of George's youngest daughter June, played in the series by newcomer Honor Kneafsey.

The series also stars Ralf Little (The Royle Family) as Lizzie's mischievous brother Billy Atkinson, upcoming actress Amelia Clarkson (Jane Eyre) plays George and Lizzie's eldest daughter Mew and Sophia Myles (Underworld) stars as Lady Katherine, the mysterious aristocrat neighbour with a past. Her fascination with George's desire to build a Zoo makes her a powerful muse to him, but also causes tension between George and Lizzie. Stephen Campbell-Moore (The History Boys) plays Reverend Aaron Webb, who is hell-bent on scuppering George's plans for the Zoo to go ahead.

Our Zoo is released on DVD on 27th October 2014 and extras include 'Making of The Zoo' on location with the cast, crew and animals featured in this charming period drama series.