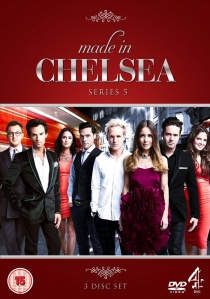 BAFTA winning Made in Chelsea, released on DVD on 2nd September 2013 courtesy of Channel 4 DVD, turns up the heat for series 5 as new characters grace the streets of Chelsea bringing with them more cat fights, designer couture and vintage champagne than ever!

After the explosive revelations of the Christmas party at the end of last series, tensions are still running high. Spencer and Louise are still together - but for how long? Although whatever happens with them, you can be sure that other hot young things will be ready to step in if it all goes wrong. Andy has never made a secret of his feelings for Louise, and Lucy has always had a twinkle in her eye for Spencer. Could Lucy and Andy get their guy and gal?

New girls on the scene Olivia, Fran and Phoebe catch the boys eyes but they bring complications from the past. The catty comments fly between Olivia and Lucy, it. s clear they have history and neither of them is going to keep quiet about it.

Series 5 sees Ollie with a brand new girlfriend... but she's someone we've met before! As ever, though, the course of true love never seems to run smoothly for him. Join our favourite posse for drinks and canapés on the elite streets of Chelsea.

Join our favourite in-crowd for drinks and canapés at the smartest addresses in Chelsea with Made In Chelsea Series 5, or why not get embroiled in the Chelsea drama from the start with the complete 1-5 boxset, out to own from 2nd September 2013.