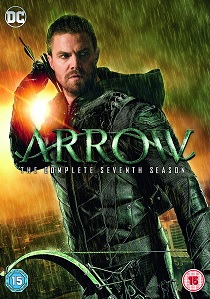 Get ready for nonstop action from start to finish when Warner Home Video releases Arrow: Season 7 on Blu-ray and DVD 16th September 2019.

Both sets contain all 22 action-packed episodes from the seventh season, plus the show's 2018 Comic-Con Panel, a crossover featurette, deleted scenes, a gag reel and more! All three DC Crossover: Elseworlds episodes will be available only for fans who purchase the Blu-ray set.

After a violent shipwreck, billionaire Oliver Queen was missing and presumed dead for five years before being discovered alive on a remote island in the North China Sea. Oliver returned home to Star City, bent on righting the wrongs of his family and fighting injustice. As the Green Arrow, he protects his city with the help of former soldier John Diggle, computer science expert Felicity Smoak brilliant inventor Curtis Holt, street-savvy Rene Ramirez aka Wild Dog and meta-human Dinah Drake.

Following Oliver Queen's shocking decision to turn himself over the FBI and reveal his identity as the Green Arrow to the public, Oliver has spent the past five months in prison while his team was left behind to protect Star City. In the wake of Ricardo Diaz's escape, Oliver has yet again turned into someone else inside Slabside Maximum Security Prison. Determined to keep a low profile to shorten his sentence for the sake of his family, Oliver's limits will be tested when he and Team Arrow are pitted against the most ruthless villains they have yet to face.

Based on the characters from DC, Arrow is produced by Bonanza Productions Inc. in association with Berlanti Productions and Warner Bros. Television, with executive producers Greg Berlanti (The Flash, Supergirl, Riverdale, DC's Legends of Tomorrow), Beth Schwartz (DC's Legends of Tomorrow) and Sarah Schechter (The Flash, Supergirl, Blindspot, Black Lightning).

DVD
Ryan Reynolds stars in this action-packed comedy as a bank teller who discovers he is actually a background player in an open world video game in Free Guy, arriving on DVD, Blu-ray and 4K UHD 4th ... END_OF_DOCUMENT_TOKEN_TO_BE_REPLACED
Top PicksView