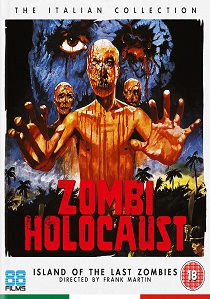 Zombi Holocaust returns the great Ian McCulloch (Contamination) to the screen as one of Italian horror cinema's most likeable heroes.

Unfortunately, though, McCulloch is once again placed in a luckless situation: arriving on a Caribbean island full of arisen, innards-hungry, undead denizens. Adding to his anguish is a tribe of peckish cannibals and, rest assured, they have still not learned how to cook their dinner properly... or picked up any table manners!

Also known as Doctor Butcher MD and expertly directed by the late Marino Girolami, Zombi Holocaust transplants two of Rome's finest fright templates into one entrails-laden entity. Indeed, as the title suggests, this legendary grindhouse gem is a macabre mix of Cannibal Holocaust and Zombie Flesh Eaters offering the primitive barbecues of the former flick with the more supernatural suspense of the latter frightener.

Can your stomach hold up? Be warned: the gore is more gruesome than ever in this beautifully re-mastered HD edition, presented uncut and uncensored, courtesy of the B-movie mavericks at 88 Films on 20th July 2015!

DVD
Released on DVD 4th April 2022 from BBC Worldwide, Golden Globe, Emmy and BAFTA winner Ben Whishaw stars in This Is Going To Hurt, Adam Kay's adaptation of his best-selling memoir about life as a junior doctor. END_OF_DOCUMENT_TOKEN_TO_BE_REPLACED
Top PicksView