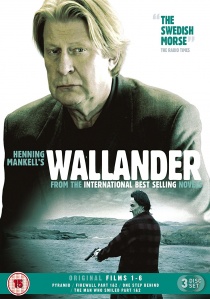 NewsTV SeriesDramaThriller
News Article Go back to homepage
Arrow Films' Nordic Noir label is pleased to announce the UK DVD Box Set release of Wallander: Original Films 1-6 on 11th June 2012. In some of the first Wallander episodes ever to be produced, this unique collection joins the original Kurt Wallander, played by Rolf Lassgård, as he sets out to solve 4 mysterious cases across 6 action-packed episodes.
Arrow Film
Unknown
11/06/2012
Thank you for supporting DVD365.net when you order using the link(s) below. As an Amazon Associate we earn from qualifying purchases
Buy DVD
Information

Arrow Films' Nordic Noir label is pleased to announce the UK DVD Box Set release of Wallander: Original Films 1-6 on 11th June 2012. In some of the first Wallander episodes ever to be produced, this unique collection joins the original Kurt Wallander, played by Rolf Lassgård, as he sets out to solve 4 mysterious cases across 6 action-packed episodes.

Based on the best-selling books by Swedish crime writer Henning Mankell, detective Kurt Wallander is an intense and headstrong maverick, prone to eating poorly, sleeping irregularly and drinking too much. The Original Films 1-6 Box Set begins with a violent and deadly showdown in Pyramid, followed by the 2-part thriller Firewall, the baffling One Step Behind and the unpredictable 2-part finale The Man Who Smiled.

The original series of Wallander films starring Rolf Lassgård have proved hugely influential. Produced between 1994 and 2007, they not only paved the way for a Swedish television adaptation featuring 26 episodes across 2 series, where Kurt Wallander was played by Krister Henriksson, but also for an English adaptation, commissioned by the BBC. Broadcast on BBC1 and syndicated worldwide, Wallander was played by the legendary Irish actor Kenneth Branagh.

Wallander is widely credited for kick-starting the UK's love of foreign language drama. To coincide with BBC1's big-budget English adaptation of the series, BBC4 announced that it would air its Swedish counterpart (based on the original films starring Rolf Lassgård). First broadcast in late 2008, The Killing and Borgen have since followed it into the nations hearts, with The Bridge now set to continue the trend. Following its recent television premier, which was seen by over 1 million viewers, the season 1 box set of The Bridge will be released on the Noric Noir imprint on May 21st.

Rolf Lassgård is one of Sweden's finest and best-loved actors. He will return to UK screens later this year as Sebastian Bergman, a troubled detective, battling grief over the loss of both his wife and daughter in the Thailand tsunami. In two highly anticipated 90 minute episodes, originally broadcast in his native Sweden on Christmas day 2010, the storyline revolves around the murder of a 15-year-old boy and a copycat serial perpetrator who appears to be basing his crimes on those of a killer Bergman himself put behind bars.

DVD
For the first time in the cinematic history of Spider-Man, our friendly neighborhood hero's identity is revealed in Spider-Man: No Way Home, released on DVD, Blu-ray and 4K UHD 4th April 2022 from Sony Pictures Home ... END_OF_DOCUMENT_TOKEN_TO_BE_REPLACED
Top PicksView