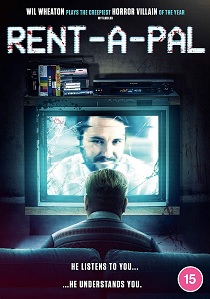 Set in 1990, Rent-A-Pal tells a story of David (Brian Landis Folkins); a lonely, 40s-something bachelor who lives alone with his mother. While Mom slowly wastes away from dementia, David must tend to her every need. But through his devotion to his mother, David has become isolated and detached. His only ray of hope is a subscription to Video Rendezvous - a dating service. David receives VHS tapes of women in his town who are looking for a partner. He's yet to receive a match through the service but remains diligent, and regularly spends his mother's social security checks to seek the perfect mate.

After one of his frequent visits to the Video Rendezvous studio, David discovers a strange VHS tape - Rent-A-Pal. Unlike the dating tapes, which offer potential love connections, Rent-A-Pal has a very specific purpose - giving lonely people a new best friend. The "interactive" tape, hosted by the charming and hypnotic Andy, promises to give David someone to talk to, someone who will listen, and someone who will be there for him in his darkest days. But in his fragile state of vulnerability, the effect of the tape on David is more profound than he could have imagined.

At first, chatting with Andy is awkward and uncomfortable. Although the premise of the video is sincere, David can't ignore the fact that Andy is only pretending to listen to him. But after a painful rejection from Video Rendezvous, David commits to a friendship with Andy. Fueled by alcohol, loneliness, and his own staggering vulnerability, Rent-A-Pal quickly grabs a hold of David and leads him down a dark, more sinister path. Now, he must save himself from tumbling down the rabbit hole by standing up against the formidable Andy, and worst of all - himself.

Rent-A-Pal is released on DVD and Digital 11th January 2021 from Lightbulb Film Distribution.

DVD
A 13-year-old girl named Meilin turns into a giant red panda whenever she gets too excited in Disney and Pixar's 25th feature film Turning Red, released on DVD, Blu-ray and 4K UHD 2nd May 2022 from Walt Disney Home ... END_OF_DOCUMENT_TOKEN_TO_BE_REPLACED
Top PicksView