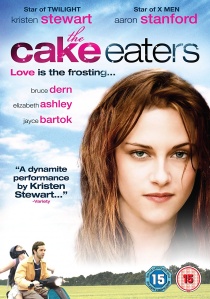 Twilight's Kristen Stewart stars alongside Aaron Stanford (X Men: The Last Stand) in The Cake Eaters, released by High Fliers on 17th January 2011, light-hearted, bittersweet story about two families as they confront old ghosts and discover love in the face of devastating loss, directed by Mary Stuart Masterson (Some Kind of Wonderful and Fried Green Tomatoes).

The Kimbrough family is an odd bunch; Easy, the father (Bruce Dern), owns a butcher shop and finds himself grieving over the death of his wife while also hiding a secret relationship he's had for years; Beagle (Aaron Stanford) his youngest son was left to care for his ailing mother, works in the local high school cafe but also has a burning passion that manifests itself through painting; and the eldest son, Guy, who has been away for years while pursuing his musical dream in the city until the day of his mother's death.

When Guy returns home, the complex nature of each family member unravels, and as Beagle begins a relationship with Georgia Kaminski, (Kristen Stewart) a terminally ill teenage girl who is desperate to experience love before it's too late, both the Kimbrough family and the Kaminski family try to establish a new beginning in the face of their greatest fears - life, death and family... HotDVDBD
imagining of what might have happened during the Christmas festivities at the Queen's Sandringham Estate, Spencer is released on DVD and Blu-ray 7th February 2022 from STX Entertainment. END_OF_DOCUMENT_TOKEN_TO_BE_REPLACED
Comments
BD Releases News Pick

BD
For the first time in the cinematic history of Spider-Man, our friendly neighborhood hero's identity is revealed in Spider-Man: No Way Home, released on DVD, Blu-ray and 4K UHD 4th April 2022 from Sony Pictures Home ... END_OF_DOCUMENT_TOKEN_TO_BE_REPLACED
Top PicksView