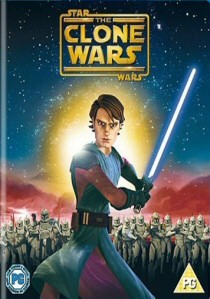 Star Wars takes on a dazzling new look in the first-ever animated feature from Lucasfilm Animation - Star Wars: The Clone Wars. As the Clone Wars sweep through the galaxy, the heroic Jedi Knights struggle to maintain order and restore peace. Star Wars: The Clone Wars takes fans into the thick of the battle with stunning animation and non-stop action befitting of the epic saga when it arrives on Blu-ray and DVD from Warner Home Video on 8th December 2008.

In Star Wars: The Clone Wars, the heroic Jedi Knights struggle to maintain order and restore peace. More and more systems are falling prey to the forces of the dark side as the Galactic Republic slips further and further under the sway of the Separatists and their never-ending droid army.

Anakin Skywalker and his Padawan learner Ahsoka Tano find themselves on a mission with far-reaching consequences, one that brings them face-to-face with crime lord Jabba the Hutt. But Count Dooku and his sinister agents, including the nefarious Asajj Ventress, will stop at nothing to ensure that Anakin and Ahsoka fail at their quest. Meanwhile, on the front lines of the Clone Wars, Obi-Wan Kenobi and Master Yoda lead the massive clone army in a valiant effort to resist the forces of the dark side ...

DVD
An expert cutter must outwit a dangerous group of mobsters in order to survive a fateful night in The Outfit, released 1st August 2022 on DVD, Blu-ray and 4K UHD from Dazzler Media. END_OF_DOCUMENT_TOKEN_TO_BE_REPLACED
Top PicksView