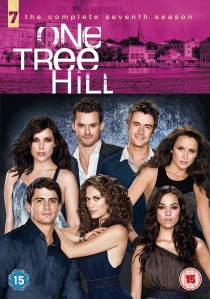 Catch up with old friends and make some brand new ones in the ever-eventful town of Tree Hill this autumn as One Tree Hill: Season 7 comes to DVD from 11th October 2010, courtesy of Warner Home Video/

With seven seasons under its belt, One Tree Hill has followed the lives, laughs, loves and deaths of our TV favourites, including Nathan (James Lafferty), Hayley (Bethany Joy Galeotti) and Brooke (Sophia Bush). Growing up in the small, but not so quiet town of Tree Hill has not been without its troubles and throughout the series viewers have watched the group of friends grow from high-school teenagers to mature and successful adults.

One Tree Hill: Season 7 takes place one year on from the end of season six. With One Tree Hill stalwarts Lucas and Peyton having moved on to pastures new, Season 7 sees the introduction of two new characters: Haley's free spirited sister Quinn (Shantel Van Santen); and Nathan's agent Clayton (Robert Buckley). In addition, Nathan's burgeoning NBA career is jeopardized by a growing scandal that threatens to consume him and all those he holds sear; Dan (Paul Johansson) becomes a motivational speaker with the support of his new wife, Rachel (Danneel Harris) and the beautiful Brooke (Sophia Bush) releases her new clothing line and faces some tense conflict with Julian (Austin Nichols) and Alex (Jana Kramer).

Revel in the endless parade of gorgeous girls and hot hunks and indulge in a season packed with simmering secrets and romantic entanglements - however you look at is, One Tree Hill: Season 7 is this autumn's must-see TV DVD box set!

UHD
One of the most compelling and conflicted characters in Sony Pictures Universe of Marvel Characters comes to the big screen as Jared Leto transforms into the antihero Michael Morbius as Morbius is released on 4K Ultra HD, Blu ... END_OF_DOCUMENT_TOKEN_TO_BE_REPLACED
Top PicksView