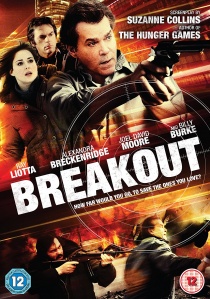 With a screenplay co-written by Suzanne Collins, author of The Hunger Games, dramatic chase thriller Breakout, released on DVD on 9th September 2013 courtesy of Lionsgate Home Entertainment, is the story of a young mother who must resort to radical measures to protect her children.

Forced to flee with her two young children, recently divorced mother Jocelyn (Alexandra Breckenridge; TVs American Horror Story) must keep her family safe from her dangerous ex-husband (Billy Burke; The Twilight Saga), whilst also trying to avoid the law. With the police chasing her on charges of kidnapping, Jocelyn's only hope is an underground network whose purpose is to aid people in her situation. Putting her trust in Jim (Ray Liotta; Goodfellas) and his mysterious contacts may be Jocelyn's only hope of freeing her family and putting a dark chapter of their lives behind them.

DVD
In Brian And Charles, released on DVD and Blu-ray 10th October 2022 from Mediumrare, an inventor lives alone in a remote village in the countryside, inventing useless things out of found objects in his garage. That is until ... END_OF_DOCUMENT_TOKEN_TO_BE_REPLACED
Top PicksView