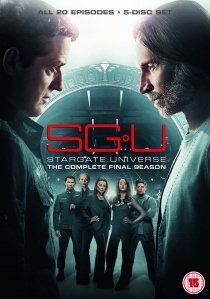 The nail-biting finale is coming to a living room near you as the last thrilling installment of the award-winning Stargate saga, Stargate Universe: Season 2 is released on DVD on 29th August 2011 from Twentieth Century Fox Home Entertainment.

Supplies on board are running dangerously low, tensions are rising and Destiny's ultimate mission remains unknown. Facing uncharted space and enemies who would take the ship by force, the crew must learn to trust each other and the Destiny itself in order to survive and to keep hopes of returning to earth alive.

Full of suspense, unexpected twists and turns, spectacular visual effects and in-depth special features, Stargate Universe on DVD is a must-have for all Stargate and sci-fi fans. Delve into Season 2 or pick up the Season 1 and 2 box-set, but join the Destiny this summer.

Stargate Atlantis Seasons 1-5 will also be released on Blu-ray on 29th August 2011. This is the first time all 100 episodes of this iconic series will be available in high-definition in the UK.

UHD
Based on the bestselling comic book, Vin Diesel stars as Ray Garrison, a soldier recently killed in action and brought back to life as the superhero Bloodshot, available 8th June 2020 from Sony ... END_OF_DOCUMENT_TOKEN_TO_BE_REPLACED
Top PicksView