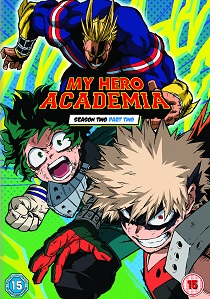 The class of heroes return to face their biggest challenge yet when My Hero Academia Season Two, Part Two springs into action on DVD and Blu-ray on 11th June 2018, courtesy of Sony Pictures Home Entertainment. With the U.A. High Sports Festival behind them, young Izuku Midoriya and his peers are assigned superhero internships when the work experience gets a little too real - a serial killer with super-powered bloodlust is on the loose and on a collision course with our fletchling heroes in the exciting finale to the anime's acclaimed second season!

Our young heroes start their first internships with real pros! Put on blast by some serious training, Deku will see how far he can push his new skills when a classmate gets cornered by Hero Killer: Stain. The fight leaves a lasting impression before Class 1-A goes back to the grind for final exams. Setting aside rivalries, the students face their toughest opponents yet-their teachers.

BD
Stuck in a meaningless job and drowning in the alcoholism that cost him his marriage, Jack Cunningham is asked to coach the basketball team at his alma mater, in Finding The Way Back is released on ... END_OF_DOCUMENT_TOKEN_TO_BE_REPLACED
Hot PicksView