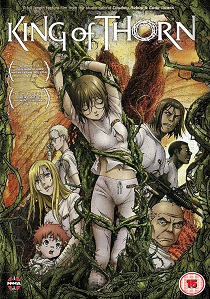 In King of Thorn, released on DVD on Blu-Ray by Manga Entertainment on 23rd April 2013, humanity's last hope Panic spreads worldwide as the Medusa Virus - a fatal pandemic that solidifies the body to stone - threatens to wipe out the human race. One-hundred and sixty infected individuals are selected to be cryogenically frozen while a cure is developed. Kasumi is one of those chosen for the experimental program.

Forced to enter without her twin sister, Shizuku, her distress multiplies when she awakens to find the facility overrun with thick, thorny vines and ravenous monsters. As Kasumi and six others fight a losing battle to escape this labyrinthine nightmare, questions cloud her distorted mind. Where is her sister? Why did their only salvation mutate into a deathtrap? If they survive, how much longer do they have to live?