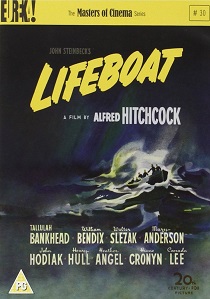 NewsDrama
News Article Go back to homepage
Based on an unpublished novella by John Steinbeck, Lifeboat, one of the finest 1940s works by the Master of Suspense, Alfred Hitchcock, is to be released in the UK on DVD & Blu-ray as part of Eureka Entertainment's Masters of Cinema series on 23rd April 2012.
Henry Hull, John Hodiak, Mary Anderson, Walter Slezak, William Bendix, Tallulah Bankhead
Alfred Hitchcock
Darryl F. Zanuck, Alfred Hitchcock, William Goetz, Kenneth Macgowan
Eureka Entertainment
1 hour 37 minutes
23/04/2012
Thank you for supporting DVD365.net when you order using the link(s) below. As an Amazon Associate we earn from qualifying purchases
Buy DVD
Buy BD
Information

Lifeboat, one of the finest 1940s works by the Master of Suspense, Alfred Hitchcock, is to be released in the UK on DVD & Blu-ray as part of Eureka Entertainment's Masters of Cinema sries on 23rd April 2012.

Based on an unpublished novella by John Steinbeck (written on commission expressly to provide treatment material for Hitchcock's screen scenario), Lifeboat found the Master of Suspense navigating a course of maximal tension - in the most minimal of settings - with a consistently inventive, beautifully paced drama that would foreshadow the single-set experiments of Rope and Dial M for Murder.

After a Nazi torpedo reduces an ocean liner to wooden splinters and scorched personal effects, the survivors of the attack pull themselves aboard a drifting lifeboat in the hope of eventual rescue. But the motivations of the German submarine captain (played by Walter Slezak) on the eponymous craft might extend beyond mere survival...

With a cast including Shadow of a Doubt veteran Hume Cronyn and the extraordinary, irrepressible Tallulah Bankhead, this "picture of characters", as François Truffaut aptly termed the film, oscillates dazzlingly between comic repartée and white-knuckle suspense - a perfect example of "the Hitchcock touch".