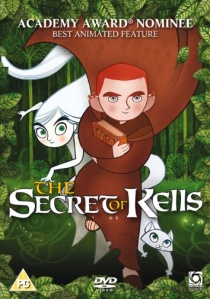 In The Secret of Kells, released on DVD from Optimum Home Entertainment on 1st November 2010, adventure, action and danger await young Brendan who must fight Vikings and a serpent God to find a crystal and complete the legendary Irish Book of Kells. From the producers of Kirikou and Triplets of Belleville, a new animated masterpiece.

In the 9th Century, in a remote part of Ireland, lies the fortified Kells Abbey, where 12 years old Brendan lives quietly. He is hard at work with the other monks to fortify the abbey walls as protection against Viking raids. But he is called to a new life of adventure with the arrival of Brother Aidan, a celebrated master illuminator and keeper of an extraordinary, but unfinished Book. Aidan initiates Brendan into the art of illumination, awakening a prodigious talent.

Brendan must finish the magnificent book. He has to overcome his deepest fears on a secret quest that will take him for the first time beyond the Abbey's walls into the enchanted forest where dangerous mythical creatures hide. It is here where he meets the fairy Aisling, a mysterious young white wolf/girl, who will help him along the way. But with the terrifying Viking hordes closing in, will Brendan's artistic vision illuminate the darkness and show that enlightenment is the best fortification against barbarians?

Related Articles
Paddington 2, Dark Blue, Paddington 2, Hampstead, Alone in Berlin, Trespass Against Us, Live by Night, In the Heart of the Sea, Suffragette, Song of the Sea, Stonehearst Asylum, The Grand Seduction, Live Die Repeat: Edge of Tomorrow, Calvary, The Smurfs 2, Black Irish, The Raven, Safe House, The Guard, Harry Potter and the Order of the Phoenix, 28 Days Later, The Kingdom of Heaven: Special Edition, Mission Impossible 2, In Bruges
Song of the Sea
The Breadwinner
Two By Two
La Cha Cha
Comments
BD Releases News Pick