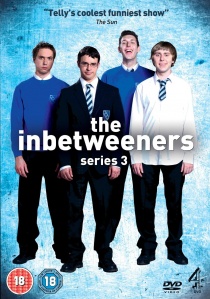 The hotly anticipated third series of The Inbetweeners hit our screens this September and became the highest rated E4 show ever, pulling in over 2.5 million viewers for its first episode. Now Series Three of the multi-award winning comedy is available to own on DVD from 25th October 2010, with the Series 1-3 Box Set released on the same day by 4DVD.

The Inbetweeners follows the often misguided footsteps of four friends, Will, Simon, Neil and Jay, as they try to navigate their way through sixth form, with their hormones running riot.

Often described as the British American Pie, The Inbetweeners delves deep into the psyche of the British teenage boy to discover equal amounts of lust, sick and cheap lager. None of our heroes are exceptional, all are distinctly average. And trying to convince the world they are sophisticated, sexy human beings usually ends in wretched disaster.

Spawning phrases such as 'clunge', 'bus wankers' and 'briefcase wanker' The Inbetweeners has become iconic and manages to reflect the minefield that sixth form can be, for 17 year old boys. Collecting a host of celebrity fans such as Wayne Rooney, Rio Ferdinand, Fearne Cotton and Stephen Fry, the show has launched from a cult status into a mainstream comedy.

Written and executive produced by Damon Beesley and Iain Morris for Bwark Productions, the show has already landed an impressive array of awards including; a BAFTA, British Comedy Awards, an RTS award for writing, a Broadcast Award, a TV Quick and TV Choice Award, an NME Award and a nomination for The National Television Awards. In addition, the DVD release of series two achieved triple the sales of series one in the week of release and the show currently has over 1.1 million friends on Facebook.

The start of term sees Carli organising a charity fashion show which Simon eagerly agrees to take part in, Will trying to escape being known as the kid who shat himself in the exam, and Jay is still up to his neck in imaginary sexual experiences. Over the six episodes, the quartet also tries their hand at camping, gigs and 'puff', obviously all with disastrous consequences.

And as the year goes on, one of the boys gets a proper, living breathing girlfriend - something the others find a little hard to take but very easy to ridicule.

The special features include hilarious outtakes, video diaries, and behind the scenes footage. There are also audio commentaries available for all of the six episodes from the writers and cast.

Work continues on a feature length production of The Inbetweeners and a US version of the show is in the pipeline.