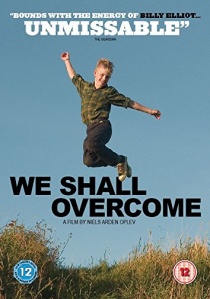 Drakes Avenue and the ICO are pleased to announce that Niels Arden Oplev's (The Girl With the Dragon Tattoo) We Shall Overcome will be available on DVD for the first time from 22nd July 2013.

Set in the late 60's in provincial Den mark, We Shall Overcome is an award winning family film, based on a true story, about a young boy's fight against a brutal headmaster.

It is the summer of 1969 and thirteen year old Frits' family have just acquired their first television set. Frits' father has recently suffered a nervous breakdown and young Frits is highly susceptible to events at home, at school and in the rapidly changing wider world.

With his father in hospital, Frits finds himself surrounded by other male figures of authority. His music teacher becomes his friend and confidant, introducing him to inspirational singers and helping him to find his own identity. His headmaster, a respected member of the local community, is a tyrant who bullies children in private and eventually beats Frits so severely that he needs stitches for his injuries. Frits' grandfather is present but absent in his refusal to stand up to those around him.

But it is Martin Luther King who speaks to Frits all summer long through the newly acquired television set. King's speeches and dreams of a better life armour Frits with the courage and desire to stand up to the authorities. As the political seeds of rebellion are sewn in the world around him that summer, Frits goes on his own uplifting and very personal journey

Related Articles
Flatliners, Dead Man Down, The Girl With The Dragon Tattoo
Above The Street Below The Water
Comments
BD Releases News Pick

BD
After more than thirty years of service as one of the Navy's top aviators, Pete 'Maverick' Mitchell is back where he belongs as Top Gun: Maverick flies onto DVD, Blu-ray and 4K UHD 31st October 2022 from Paramount Home ... END_OF_DOCUMENT_TOKEN_TO_BE_REPLACED
Top PicksView