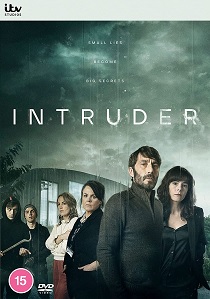 NewsTV SeriesThrillerCrime
News Article Go back to homepage
Exploring the dark and devasting aftermath of a break-in at a luxurious home on the coast, Intruder is an edge-of-your-seat thriller will be available to buy on DVD 17th May 2021 from ITV Studios Home Entertainment.
Tom Meeten, Elaine Cassidy, Sally Lindsay, Helen Behan, John Burke, Adam Richardson
Gareth Tunley
Julie Ryan
ITV Studios Home Entertainment
4 hours 0 minutes
17/05/2021
#Intruder
Thank you for supporting DVD365.net when you order using the link(s) below. As an Amazon Associate we earn from qualifying purchases
Buy DVD
Information

Exploring the dark and devasting aftermath of a break-in at a luxurious home on the coast, Intruder follows an affluent couple played by Tom Meeten (Motherland) and Elaine Cassidy (No Offence) as they compromise everything they purport to stand for. This edge-of-your-seat thriller will be available to buy on DVD from 17th May 2021 and is on Digital Download now.

When a wealthy couple kill a young Asian burglar, they quickly realise that, rather than self-defence, they will be accused of murder. To protect themselves from prosecution they form a plan to restage the crime scene and convince the police their lives were in immediate danger. However, with two witnesses to their crime and a family liaison officer on their tails, the cover up begins to unravel. This contemporary, psychological thriller examines how one big lie can send two outwardly respectable people on a path towards increasingly darker deeds.

BD
In The Duke, released on DVD and Blu-ray 13th June 2022 from Warner Home Video, Kempton Bunton, a 60 year old taxi driver, steals Goya's portrait of the Duke of Wellington from the National Gallery in London. END_OF_DOCUMENT_TOKEN_TO_BE_REPLACED
Top PicksView