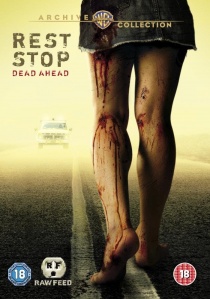 News
News Article Go back to homepage
Rest Stop, Sublime and Believers explore the terror of everyday situations which take an unexpectedly sinister turn for the worst. Making their DVD debut on 11th June 2007 from Warner Home Video, each film will be released individually with extensive and innovative extra features
Jaimie Alexander, Joey Mendicino, Deanna Russo
Warner Home Video
1 hour 25 minutes
30/01/2013
Thank you for supporting DVD365.net when you order using the link(s) below. As an Amazon Associate we earn from qualifying purchases
Buy DVD
Information

Rest Stop, Sublime and Believers explore the terror of everyday situations which take an unexpectedly sinister turn for the worst... A couple on a road trip are terrorised by a crazed psychopath in Rest Stop, an unsuspecting man checks into hospital for what he thinks is a minor procedure but things become complicated when he begins to uncover the hospital's disturbing secrets in Sublime and two paramedics out on a routine call are captured by a fanatical suicide cult in Believers. Making their DVD debut on 11th June 2007 from Warner Home Video, each film will be released individually with extensive and innovative extra features

Jess (Joey Mendicino) is at the wheel. Nicole (Jaimie Alexander) rides shotgun. And at the end of the road stretching before them is glittering, glamorous Hollywood. They're on a road trip, all right...straight to hell. When the runaway lovers pause at an abandoned rest stop, Jess disappears. And someone else appears - someone with his own demented sense of fun.

With drills. Staple guns. Box cutters. All the tearing, grinding, ripping tools you need to hew wood. Or metal. Or people. Especially young, pretty people just like Nicole. Raw fear rules in Rest Stop, the first film from Raw Feed, the newest brand name in horror, sci-fi and thrillers. Director John Shiban, writer and executive producer of The X-Files and Supernatural, keeps the terrors and twists coming, each out-shocking the last. Stop. Stay awhile. But don't expect to rest.

Family man George Grieves (Tom Cavanagh) checks into Mt. Abadon Hospital for a routine procedure. When he awakens from his anesthesia, something is terribly wrong...with George...with the hospital...and especially with the shuttered East Ward, an eerie lair of secrets, sex and surgical terrors.

Raw Feed presents the fear-drenched psychological thriller Sublime, directed by Tony Krantz (executive producer of 24) from a screenplay by Emmy Award winner Erik Jendresen (Band of Brothers). In the tradition of cinema's classic tales of suspense, Sublime will keep you guessing as its puzzle pieces fall into place, and leave you stunned by its astounding conclusion. Graphic, bold, sexual and utterly horrifying, Sublime explores what happens when your worst fears become reality.

While on duty two emergency paramedics, David Vaughn (Johnny Messner) and Victor Hernandez (Jon Huertas, Invasion, CSI), receive a call from a young girl whose mother has lost consciousness in a deserted area. However, when they get there they are captured by members of the fanatical suicide cult of Quanta.

Led by the teacher and cult leader (Daniel Benzali), they must fight for their lives if they are ever to escape the cult's desert compound. Drugged and isolated in a remote maximum security community the two can only hope that they are able to escape before the 'chosen ones' master plan is complete. Directed by Award-winning filmmaker Daniel Myrick (The Blair Witch Project).