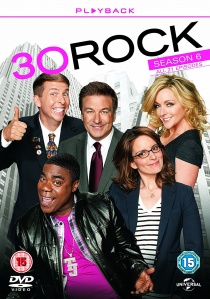 Liz Lemon (Fey), the struggling TGS writer is back and seems to have found a new groove along with M&M® pancake - filled domestic bliss. But with executive Jack Donaghy (Baldwin) scheming his way through Kable Town, Tracy Jordan (Morgan) finding his voice as an idiot, Jenna Maroney (Krakowsi) taking her love life to new levels of extreme and NBC Page Kenneth Parcell (McBrayer) being, well, Kenneth, will the chaos be toomuch for this new and improved Liz to handle?

In addition to the 21 episodes of the critically acclaimed series from executive producer Lorne Michaels (Sons & Daughters), the hilarity continues with loads of bonus content including commentaries, deleted scenes and an alternate version of "Live From Studio 6 H" episode. Whether you are a returning fan of the show, or similar comedies such as The American Office, get your hands on the laugh-out- loud 30 Rock: Season 6 available on DVD from 15th April 2013.