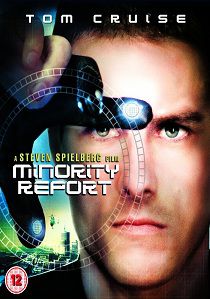 In Washington, D.C., in the year 2054, murder has been eliminated. The future is seen and the guilty punished before the crime has ever been committed. The distinctive near future world - the world of sci-fi thriller Minority Report - arrives in the UK on Blu-ray Disc (BD) on 17th May 2010 from Twentieth Century Fox Home Entertainment. This new high-definition version of the film was personally supervised and approved by acclaimed director Steven Spielberg.

Action-packed Minority Report is based on the short story 'The Minority Report' by legendary author Philip K. Dick. Led by Tom Cruise (Mission: Impossible, War of the Worlds) as a detective who must race to uncover the truth before he becomes a victim to the system he helped create.

The cast features a diverse and accomplished ensemble of actors, including Colin Farrell (Crazy Heart, In Bruges); Samantha Morton (Elizabeth: The Golden Age, The Messenger); and Max von Sydow (Shutter Island). From a nexus deep within the Justice Department's elite Pre-Crime unit, all the evidence to convict - from imagery alluding to the time, place and other details - is seen by 'Pre-Cogs', three psychic beings whose visions of murder have never been wrong.

This all-new Minority Report Blu-ray edition is complete with exciting extras that take you right into the action! With Steven Spielberg as the guide and host, interact with The Future According to Steven Spielberg: An Interactive Guide to Minority Report. This special feature takes the BD viewer on a completely interconnected tour of the making of the film.

From storyboards and production art to animation tests, and behind-the-scenes footage - all access available at the touch of a menu selection. Additional Blu-ray special features offer an insider's look into Minority Report with featurettes exploring the world of pre-crime; props of the future; commercials of the future; and how the film's 'future' has been realized nearly 10 years after production. Further features include highlights from the set that explore a selection of the key sequences and pre-visualization techniques. A 'Limited Edition' Blu-ray in Steel Book packaging will also be available in selected outlets containing 5 exclusive art cards.

Tom Cruise, Colin Farrell and Max von Sydow star in this explosive, action-packed sci-fi thriller from acclaimed director Steven Spielberg! Experience the excitement of Minority Report like never before with this all-new Blu-ray edition packed with hours of special features and presented with a stunning high-definition picture and sound. When pre-crime detective John Anderton (Cruise) is identified as a future murderer, he must race against his own specialized police department and time itself to prove his innocence of a crime he has yet to commit!