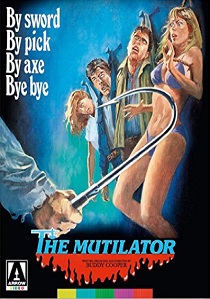 NewsHorrorThriller
News Article Go back to homepage
Although the slasher film was in decline by the mid-1980s, there were still some grisly delights to be had... and they don't come much grislier than The Mutilator, released with a brand new 2K restoration of the unrated version by Arrow Video on 15th February 2016.
Matt Mitler, Ruth Martinez, Bill Hitchcock, Connie Rogers, Frances Raines, Morey Lampley
Buddy Cooper
Buddy Cooper
Arrow Video
1 hour 25 minutes
15/02/2016
#TheMutilator
Thank you for supporting DVD365.net when you order using the link(s) below. As an Amazon Associate we earn from qualifying purchases
Buy DVD
Buy BD
Information

Although the slasher film was in decline by the mid-1980s, there were still some grisly delights to be had... and they don't come much grislier than writer-director Buddy Cooper's sickening stalk-and-slash classic The Mutilator, released with a brand new 2K restoration of the unrated version by Arrow Video on 15th February 2016.

When Ed receives a message from his father asking him to go and lock up the family s beach condo for the winter, it seems like the perfect excuse for an alcohol-fuelled few days away with his friends. After all, his dad has forgiven him for accidentally blowing mom away with a shotgun several years ago... hasn't he? But no sooner are the teens on the island than they find themselves stalked by a figure with an axe (and a hook, and an onboard motor) to grind...

Originally entitled Fall Break (watch out for the incongruous theme song of the same name!), The Mutilator has earned a reputation amongst horror fans as one of the holy grails of 80s splatter mayhem due to its highly inventive (and not to say, decidedly gruesome) kill sequences, courtesy of FX wizard Mark Shostrom (Videodrome, Evil Dead II). Finally making its long-awaited bow in High-Definition, The Mutilator has returned to terrorise a whole new generation of horror fans!