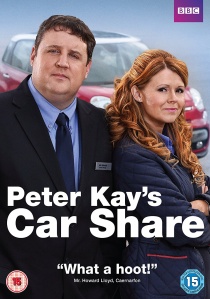 In Peter Kay's Car Share, released on DVD and Blu-ray by BBC Worldwide on 23rd November 2015, John Redmond (Peter Kay) and Kayleigh Kitson (Sian Gibson) have been thrown together in a company car share scheme, forcing their paths to cross.

Each trip brings fresh insight into John and Kayleigh's lives, with twists and turns in their unlikely relationship.

BD
In Brian And Charles, released on DVD and Blu-ray 10th October 2022 from Mediumrare, an inventor lives alone in a remote village in the countryside, inventing useless things out of found objects in his garage. That is until ... END_OF_DOCUMENT_TOKEN_TO_BE_REPLACED
Top PicksView