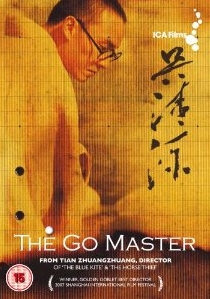 NewsTV Series
News Article Go back to homepage
Set for DVD release by ICA Films on 6th October 2008, The Go Master is a restrained, thoughtful biopic of Wu Quingyuan, considered by many to be the greatest player ever of the game Go.
Yi Huang, Mansaku Fuwa, Aki Fujî, Akira Emoto, Sylvia Chang, Chen Chang
Zhuangzhuang Tian
Xiaodian Liu, Hao Li
ICA Films
1 hour 44 minutes
06/10/2008
Thank you for supporting DVD365.net when you order using the link(s) below. As an Amazon Associate we earn from qualifying purchases
Buy DVD
Information

Spanning from the 1930s through to the Second World War and into the 1960s, The Go Master is the much heralded new film from acclaimed director Tian Zhuanzhuang. Set for DVD release by ICA Films on 6th October 2008, The Go Master is a restrained, thoughtful biopic of Wu Quingyuan, considered by many to be the greatest player ever of the game Go.

Go is a table game requiring intense stamina, energy, emotions, strategy and intellect from its players. Developed in ancient China but finding a new home in post-Meiji Japan, Go's adherents treated its rules and regulations in a fashion far stricter and more disciplined than that of its Chinese roots.

Wu Quingyuan was born in China, but moved to Japan at a young age. Rising to prominence as the top Go player in the world, Wu overturned the established traditions and strategies of this ancient game, earning multitudes of fans and enemies along the way. Amidst the fraught relations between Japan and China - Japan's colonisation of Manchuria and invasion of China in the 1930s, the Pacific War in the 1940s and the Cold War of the 1950s, Wu remained steadfastly in Japan.

The Go Master is, however, more of a story of the complex inner life of Wu than the way in which his life was buffeted by nationalism, militarism and the forces of history. It is the story of the greatest player of the game Go. Now well into his 90s, he continues to reside in Japan playing Go, writing strategy books and living the life of The Go Master.

Born in 1952, Tian Zhuangzhuang's father was an actor who became the head of the Beijing Film Studio, while his mother was an actress who took charge of China's Children's Film Studio. Tian spent several years at the Beijing Film Academy learning directing before working in television. He has since gone on to become one of China's most acclaimed 5th Generation filmmakers.