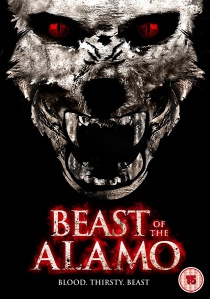 Something disturbing is happening in San Antonio, Texas. Members of rival drug cartels are turning up dead... with every drop of blood siphoned from their bodies. When the investigating veteran DEA agent, Carlos Seguin, discovers the horrifying truth behind these brutal killings, nobody will accept the un-settling reality...

Starring Erik Estrada and Nicole Munoz, Beast of the Alamo is released on DVD by Signature Entertainment on 12th August 2013.