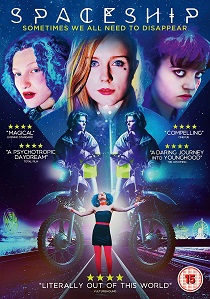 A unique and intriguing portrait of teenage outsiders from a fresh new voice in British cinema, Spaceship stars an electrifying ensemble cast including Alexa Davies (A Brilliant Young Mind, Raised by Wolves) who was recently nominated for the Evening Standard New West End Company Award for Best Actress for her role in the film, Tallulah Haddon (The Living and the Dead, Taboo), Lara Peake (Bypass, How to Talk to Girls at Parties) and Finnish actor Antti Reini (The Man Without a Past, Vares series).

Spaceship tells the story of Lucidia (Alexa Davies), a British cyber-goth teenager who fakes her own alien abduction, forcing her father Gabriel (Antti Reini) to search for her in a surreal world of black holes and unicorns where everyone is looking for a way out.

Alex Taylor is an award-winning director whose first short Kids Might Fly won a Special Jury Prize at the SXSW festival in 2010, after which he was chosen by Screen International as a "Star of Tomorrow" and by The Independent as "One to Watch". An innovative new voice in British cinema, Alex describes his debut feature Spaceship as "a film fuelled by teenage energy where everyone is pulled together by teenage gravity. This movie is for anyone who feels alone in their quest to be something different. I wanted to put outsiders on the inside."

With bewitching cinematography and an eclectic soundtrack of musicians and bands including Annabel Allum (who also performs in the film), Appaloosa, Best Coast, Sunless 97 and East India Youth, Spaceship will be released on DVD & EST on 10th July 2017 by Trinity Film.

BD
Tom Hardy returns as the lethal protector Venom, one of Marvel's greatest and most complex characters in Venom: Let There Be Carnage, available on 4K Ultra HD, Blu-ray and DVD on 3rd January 2022 from ... END_OF_DOCUMENT_TOKEN_TO_BE_REPLACED
Top PicksView