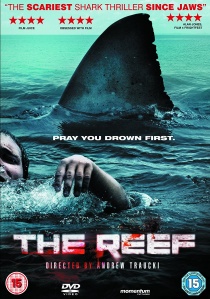 NewsHorrorThriller
News Article Go back to homepage
From the director that brought you the deeply scary Black Water and the studio that chilled you to your core with the masterful horror Frozen comes The Reef the most terrifying shark thriller since Jaws released on DVD from 24th January 2011 from Momentum Pictures.
Mark Simpson, Kieran Darcy-Smith, Zoe Naylor, Adrienne Pickering, Gyton Grantley, Damian Walshe-Howling
Andrew Traucki
Janine Pearce, Richard S. Guardian, Richard Goldberg, Michael Baskin
Momentum Pictures
1 hour 34 minutes
24/01/2011
Thank you for supporting DVD365.net when you order using the link(s) below. As an Amazon Associate we earn from qualifying purchases
Buy DVD
Information

From the director that brought you the deeply scary Black Water and the studio that chilled you to your core with the masterful horror Frozen comes The Reef the most terrifying shark thriller since Jaws released on DVD from 24th January 2011 from Momentum Pictures.

When the trip of a lifetime takes a devastating turn, four friends are faced with a life or death decision: should they stay put and pray for rescue or should they take their life into their own hands and make a desperate break for safety? The only thing that's certain in The Reef is that there'll be blood in the water.

For four old friends a week sailing on the Great Barrier Reef should have been a dream come true. But when the vessel capsizes, plunging its human cargo into the depths of the treacherous ocean, that dream turns into a nightmare. What should they do? Stay with the damaged boat that could sink at any moment? Or take their chances and swim for land they hope lies 10 miles away? Seasoned fisherman Warren, fearful of what lies beneath, decides to stay with the wreck, whilst the others take to the open water. They only to learn too late that they are being stalked by a deadly great white shark, just waiting for one member of the desperate team to fall behind.

Damien Walshe-Howling leads an accomplished Australian cast in this home-grown horror of epic proportion and Zoe Naylor delivers an unforgettable performance in her supporting role. Young actors Adrienne Pickering and Gyton Grantley portray genuine unadulterated fear alongside the impressive Kieran Darcy-Smith as their guide to the ocean.

Taking the audience on a thrilling passage into wilderness survival horror, Andrew Traucki's true-life shocker - uniquely shot with real 14-foot Great White sharks - puts ordinary people in an all-too believable extreme situation. As the suspense builds to its absolute breaking point we know we are in the hands of a master of the genre.