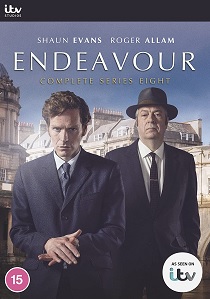 Filmed on location in Oxford the strong ensemble cast reunited with Shaun and Roger for the eighth series includes Anton Lesser (Game of Thrones) who returns as CS Reginald Bright, Sean Rigby (Gunpowder) as DS Jim Strange, James Bradshaw (Close to The Enemy) as Dr Max DeBryn, Abigail Thaw (I Want My Wife Back) as Dorothea Frazil, Caroline O'Neill (Last Tango In Halifax) as Win Thursday and Sara Vickers (Watchmen) as Joan Thursday.

The year 1971 has just begun and any hope of light duties quickly vanishes as the team, still reeling from the events of the past year, are summoned to investigate the most challenging of cases so far.

Endeavour's struggle with his inner demons reaches fever pitch, exacerbated by love, lost and guilt weighing on his mind. All the while, the team find themselves right back in the thick of it as crime in Oxford takes on a scale bigger than ever before.

The team's first case gets off to an explosive start as they investigate a college bomb with possible links to recent IRA threats. Meanwhile, a death threat to Oxford Wanderers' star striker Jack Swift places Endeavour (Shaun Evans) and his team at the heart of the glitz and glamour of 1970s football, exposing the true cost of success and celebrity, and with it, a deep-rooted division that is soon reflected much closer to home.

The cases keep coming and for Endeavour the blows keep landing as he finds himself investigating the murder of a local cabbie and family man whilst Endeavour's own past makes a surprise visit.

Before the year ends, Endeavour and Thursday find their relationship strained further when Thursday locates information proving Endeavour's problems have caused him to miss a major clue in a case. Things for the team take an interesting turn when they find themselves working separately to solve the murder of a college don. But when, Endeavour finds himself in a desperate situation, Thursday races against time to save him.