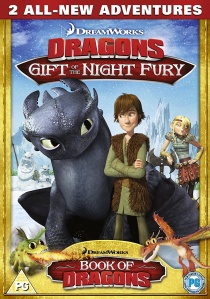 The epic story begun in the Academy Award® nominated worldwide box office hit How To Train Your Dragon and continues with the new Dreamworks Dragons - Two All New Adventures taking flight on DVD from 21st November 2011 from DreamWorks Animation.

One of the best reviewed films of 2010, How To Train Your Dragon enchanted audiences the world over with its captivating and original story boasting fire-breathing action, heroic deeds and heartfelt laughs. DreamWorks Animation's new release features two brand new adventures plus a host of entertaining bonus features in one highly-affordable package just in time for Christmas gift-giving.

Dreamworks Dragons - Two All New Adventures picks up where How To Train Your Dragon left off and continues the epic story of Hiccup and Toothless as they take flight in a thrilling, all-new adventure to discover an island of never-before-seen dragons. And an all-new Book Of Dragons offers more adventure, excitement and training as Hiccup, Astrid and Gobber share insider training secrets and reveal new never-before-seen dragons. In addition, the new DVD includes Gobber's Training Secrets, deleted scenes, a spot the difference game, a tutorial on drawing a baby Gronckle, DVD-Rom printables and activities and more.