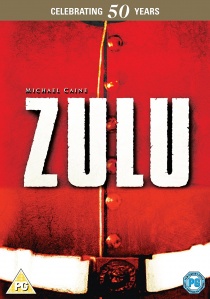 On the 85th anniversary of the Battle of Rorke's Drift during the Anglo-Zulu war in South Africa, the theatrical release of a new historical war drama made an indelible mark on British cinematic history. Rediscover the epic that defined a generation as Zulu : 50th Anniversary Edition is released on Blu-Ray and DVD on 5th May 2014, courtesy of Paramount Home Entertainment.

Cy Endfield's (The Mysterious Island, Zulu Dawn) dramatic military re-enactment; Zulu, depicted the ultimate David and Goliath tale of a relatively small garrison of 139 British and colonial soldiers stalwartly defending their mission station against an army of 4,500 Zulu warriors. Eleven of the surviving men were subsequently awarded a Victoria Cross for outstanding bravery on the battle field.

To celebrate the 50th anniversary of this classic screen giant, along with the 135th anniversary of the troop's victory, the next generation can now enjoy a brand new collectible anniversary edition of this BAFTA® nominated movie juggernaut, complete with a special commemorative sleeve.

Zulu stars Emmy® nominee Stanley Baker (The Guns of Navarone, Sodom and Gomorrah) and Oscar® winner Michael Caine (The Dark Knight Rises, The Italian Job, Get Carter) as Lieutenants John Chard R.E and Gonville Bromhead respectively, who find that their contingent in Natal has been isolated by the destruction of the main British Army column and that a formidable army of Zulu warriors will descend on them within a matter of hours.

Stand your ground and take home a slice of history as the 50th anniversary edition of Zulu comes to Blu-ray and DVD on 5th May 2014.

HotDVDBD
King Of Thieves, released 21st January 2019 on DVD and Blu-ray from StudioCanal, is the incredible true story of the spectacular Hatton Garden diamond heist, the biggest and most daring in British history. END_OF_DOCUMENT_TOKEN_TO_BE_REPLACED
Comments
DVD Releases News Pick

DVD
As a collection of history's worst tyrants and criminal masterminds gather to plot a war to wipe out millions, one man must race against time to stop them in The King's Man, released on DVD, Blu-ray and 4K UHD 28th February ... END_OF_DOCUMENT_TOKEN_TO_BE_REPLACED
Top PicksView