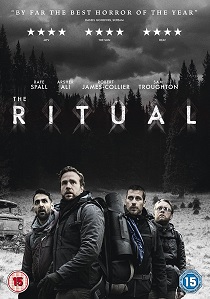 NewsHorrorThriller
News Article Go back to homepage
In The Ritual, released on DVD and Blu-ray 12th February 2018 from Entertainment One, a group of college friends reunite for a trip to the forest, but encounter a menacing presence in the woods that's stalking them.
Rafe Spall, Rob James-Collier, Arsher Ali, Sam Troughton, Paul Reid
David Bruckner
Jonathan Cavendish, Richard Holmes, Andy Serkis
Entertainment One
1 hour 34 minutes
12/02/2018
#TheRitual
As an Amazon Associate we earn from qualifying purchases
Buy DVD
Information

However, the inexperienced hikers soon find themselves hopelessly lost, and as their fragile friendships begin to crack and old resentments surface they become increasingly desperate to escape the woods. But they are not alone. Someone, or something, malevolent is watching them, intent on making them face their deepest fears and ensuring they never leave. They should have gone to Ibiza...

DVD
A detective in a small Pennsylvania town investigates a local murder while trying to keep her life from falling apart in Mare of Easttown, released on DVD and Blu-ray 13th September 2021 from Warner ... END_OF_DOCUMENT_TOKEN_TO_BE_REPLACED
Top PicksView