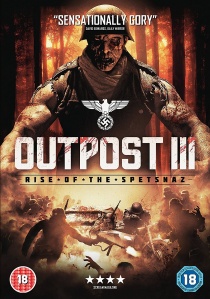 Released on DVD on 31st March 2014 courtesy of Entertainment One, the mutated return of the hit Nazi horror franchise, Outpost III: Rise of the Spetsnaz is the most violent and gut-spilling instalment yet! From teeth-shattering scares to relentless blood-spewing combat, this is the terrifying new hybrid of horror warfare.

Sergeant Dolokhov leads his team of fearless Russian Spetsnaz through the Eastern Front of Europe. After a ferocious raid on a Nazi convoy, Dolokhov unearths details of the shocking research being taken out by the Nazis that could have a serious impact on the outcome of World War II.

Before they're able to report on this vital discovery, the Spetsnaz are savagely captured by the Nazis and detained at a nearby underground facility. It's revealed that the Nazis are scientifically developing an invincible army of undead soldiers to unleash upon the unsuspecting Allies.

If Dolokhov and his squad are to survive this ordeal, and subsequently the war, they must fight their way through a series of gladiatorial battles with the experimental undead to escape the brutal facility before the Nazis can perfect their research and send their zombie army across Europe.

UHD
The end of the line is only the beginning in a wild, non-stop thrill ride through modern-day Japan as Bullet Train is released on DVD, Blu-ray and 4K UHD 24th October 2022 from Sony Pictures Home Entertainment END_OF_DOCUMENT_TOKEN_TO_BE_REPLACED
Top PicksView