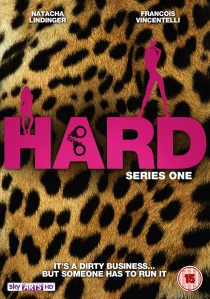 NewsTV SeriesComedyDramaFantasy
News Article Go back to homepage
Arrow Films are pleased to announce the DVD box set release of one of France's most controversial and hilarious new series, Hard, on 18th February 2013.
Arrow Films
2 hours 36 minutes
18/02/2013
#Hard Season One
Thank you for supporting DVD365.net when you order using the link(s) below. As an Amazon Associate we earn from qualifying purchases
Buy DVD
Information

Arrow Films are pleased to announce the DVD box set release of one of France's most controversial and hilarious new series, Hard, on 18th February 2013.

Written and directed by award-winning French actress Cathy Verney, Hard is a comedy drama which follows the misfortunes of Sophie, a respectable middle-class housewife from a traditionally French Catholic upbringing.

Finding ways to cope with the emotional strain of the loss of her loved one and driven by the need to keep their home and feed her family, Sophie is thrust into a world of adult fantasy and erotica as she takes control of the company and its studios.

DVD
One of the most compelling and conflicted characters in Sony Pictures Universe of Marvel Characters comes to the big screen as Jared Leto transforms into the antihero Michael Morbius as Morbius is released on 4K Ultra HD, Blu ... END_OF_DOCUMENT_TOKEN_TO_BE_REPLACED
Top PicksView